GO Battle League is a global matching system that lets you battle with other Trainers around the world, earn rewards, and improve your global ranking.
Note: This feature is only available to Trainers who are Level 10 and above.

To access GO Battle League:
Participation in GO Battle League requires unlocking a GO Battle League set, which grants you access to play a series of 5 matches. Your first GO Battle League set is unlocked for free, and you can unlock future sets by walking 3 km.
When you’ve walked a portion of the goal, a “Battle Now” button will appear, giving you the option to unlock one set by spending PokéCoins. The cost to unlock a set decreases as you approach the walking goal.

Note: Walking requirements for unlocking GO Battle League sets have been temporarily disabled.
If you lose all 5 matches in a set, you can continue playing in that same set until you win a match for up to 15 losses, after which you'll move to the next set.
You can view your progress towards earning a set on the Battle page, plus you’ll receive an in-app notification and see a red dot on the Main Menu’s Battle button when you’ve unlocked a set.

Note: Trainers can only unlock a maximum of 3 sets per day.

Each win you achieve in a GO Battle League set yields a particular reward. You can unlock different rewards with each subsequent win in a single set. Before beginning a set, pick the type of rewards you wish to receive (Basic Rewards or Premium Rewards) before tapping Battle to begin searching for a match. You must exchange a Premium Battle Pass to receive Premium Rewards.

GO Battle League seasons are periods of time after which ranks and ratings are reset.  Typically, each season of GO Battle League will progress through Great, Ultra and Master League battles, with only one league available at a time.
All Trainers who participate in GO Battle League will receive end-of-season rewards. You can see when the current season will end under the “Current Season” section of the Battle screen.

Once you’ve selected your battle party, Pokémon GO will match you with another Trainer that is currently seeking a battle. Once you’re paired up and the battle begins, use Trainer Battle tactics to defeat your challenger.
Note: You cannot use two or more of the same species of Pokémon in a GO Battle League party.
Penalties for Leaving a Battle
Intentionally exiting a GO Battle League match results in an automatic loss for that match in the set. If you lose your internet connection or your app crashes unexpectedly, you may still be able to rejoin the battle by rebooting the app, but your opponent can continue attacking your Pokémon while you attempt to rejoin.
To avoid being at a disadvantage during your battle, please ensure you have a strong internet connection before starting a match. However, strong Wi-Fi signal or cellular data (i.e. having full bars) isn't always sufficient to guarantee a stable connection. Both may slow down during periods of heavy usage, and you also may experience an unstable connection while traveling in a moving vehicle.

Trainers who participate in GO Battle League are assigned a rank, a measure of how many matches you’ve played and/or how many matches you’ve won. Once you attain a new rank, you cannot drop below it for the rest of the season. Ending a season with a higher rank results in better end-of-season rewards.
Note: Only Trainer Battles initiated by the GO Battle League global matching system will influence your GO Battle League Rank. Battling nearby Trainers through scanning a Battle Code, battling Friends through the Friends list, or training with Team Leaders will not influence your GO Battle League rank.
There are 10 possible ranks in GO Battle league, and how to increase your rank varies depending on your current ranking.

Ranks 1–3
In rank 1, you can improve your rank simply by playing matches, regardless of whether you win or lose. In ranks 2 and 3, you’ll need to win a certain number of battles to advance.

Ranks 7–9
Trainers who reach ranks 7–9 can see their rating, a number that indicates one’s performance in GO Battle League relative to other Trainers. Trainers in ranks 7–9 are matched with other Trainers according to their current rating for more competitive matches.
To reach higher ranks in this category, you must increase your matchmaking rating. Losses won’t downgrade your rank, but they do lower your matchmaking rating, so you’ll need to maintain a relatively high win-loss ratio to increase your rank. 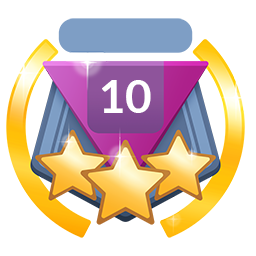