Pokémon GO allows you to battle other Trainers with parties of three Pokémon. Knock out all your opponent's Pokémon or deal more damage before time runs out to claim victory.
There are three ways to challenge other Trainers:
Note: For child accounts, parents or guardians may opt into enabling multiplayer features through the Niantic Kids Parent Portal or Pokémon Trainer Club website.
Tip: Before battling other Trainers, consider practicing by battling team leaders or battling Team GO Rocket Grunts.

Starting a Battle with Nearby Trainers

If your opponent is not an Ultra Friend or Best Friend, you will have to be in close proximity to start a battle using your Battle Code, a QR code that other Trainers can scan to Battle you. Scan another Trainer’s Battle Code or ask them to scan yours to start a Battle. 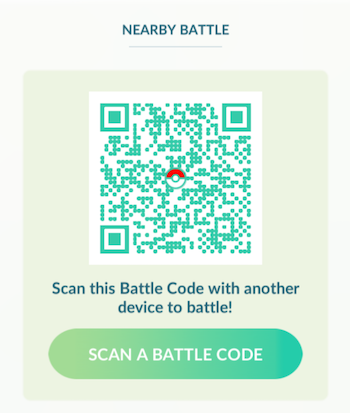 If you're level 10 or above, tap Main Menu > Battle and scroll down to Nearby Battle. If you're below level 10, go to the Nearby menu and tap the Battle tab.
Note: Battle Codes are different than the QR codes used to add Friends. These Battle QR Codes are used only to initiate a Trainer Battle and a new one generates every time you sign into Pokémon GO.

To challenge an Ultra Friend or Best Friend without having to be in close proximity to each other:
Tip: If you’d like to stop receiving Battle Challenges, you can disable this feature by visiting the Settings page and unchecking Battle Challenges from Friends.

Read this article to learn about GO Battle League.

2. Selecting a League and Battle Party

Before starting a battle, you’ll need to select a League. Leagues ensure Pokémon always match up against a battle party of comparable strength by limiting each Pokémon’s maximum Combat Power (CP). You can choose from three different Leagues to compete in: 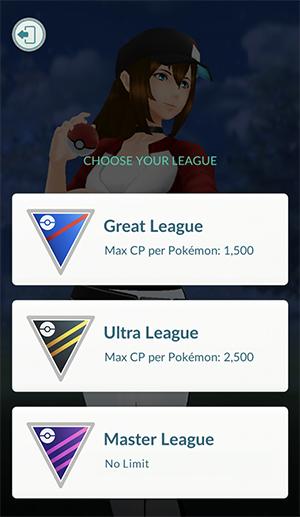 You can select three Pokémon for your battle party. Pokémon will automatically be recommended based on their Combat Power (CP) in relation to a League’s criteria. Be sure to vary the Pokémon in your battle party to exploit any potential type matchups by switching between Pokémon during battle.

To win a battle, use Fast Attacks, Charged Attacks, and Protect Shields to damage your opponent’s Pokémon and defend your Pokémon. You can also learn about type effectiveness and switch Pokémon to maximize your damage output and limit incoming damage.
Fast Attack
Tap anywhere on the screen to perform a Fast Attack. Fast Attacks recharge your Charged Attack meter.

Charged Attack
Once your Charged Attack meter is full, tap the button to use a Charged Attack. After initiating a Charged Attack, multiple type symbols will appear in a particular pattern on screen for a limited time. The type of attack you use (e.g., Electric, Psychic, etc.) determines the pattern. Tap and drag a finger along your screen to touch as many icons as you can before they disappear to strengthen the attack as much as possible.

If you don't use a Charged Attack once you've filled the meter, you continue using Fast Attacks can fill the meter one additional time. This allows you to use two Charged Attacks in quick succession.

Defending
When your opponent initiates a Charged Attack, you will have the opportunity to defend using a Protect Shield. Use Protect Shields wisely, since you’re given a limited number of shields per battle.

in the bottom left Pokémon to pull back your current Pokémon and send out another Pokémon. Switching Pokémon a great way to avoid taking damage from your opponent’s super-effective attacks. But keep in mind that your opponent can keep attacking while you’re switching Pokémon, so do so as fast as possible to avoid losing too much HP.
Ending a Battle
A battle continues until time runs out or you all of one player’s Pokémon have fainted.

When battling friends and nearby trainers, both players will earn rewards for participating in a battle, but only the winning Trainer will get to level up one of three medals: Great League Veteran, Ultra League Veteran, or Master League Veteran. Once the battle ends, you can request a rematch or send a Friend invite to your opponent. You can battle as often as you like, but you can only receive rewards for up to three battles per day.
Winning GO Battle League matches yields either Basic or Premium Rewards, and completing a GO Battle League set gives you Stardust.
Last Updated: 234d • Permalink
ICP 2020026027-1