Your device will vibrate to alert you when a wild Pokémon is nearby. If you don’t see any Pokémon nearby, take a walk! Pokémon love places like parks, so try visiting a local recreational area. You can attract more Pokémon to your location by using an item known as Incense.

Some wild Pokémon appear only in certain environments and climates. For example, some Pokémon may appear only near lakes, oceans, or other bodies of water.

Pokémon located in your area are displayed in the Nearby Pokémon section in the bottom right of the screen in Map View. Pokémon already in your Pokédex will show in color, and Pokémon you haven’t previously encountered appear as silhouettes.

When you encounter a wild Pokémon, you may have multiple attempts to capture it before it runs away.

You can use Berries and high performance Poké Balls when attempting to catch Pokémon. There are three types of Berries to choose from: Razz Berries help prevent the Pokémon from breaking free from the Poké Ball, Nanab Berries make the Pokémon easier to catch by slowing down its movement, and Pinap Berries double the amount of Candy you’ll receive if your next catch attempt succeeds. High performance Poké Balls like Great Balls and Ultra Balls increase your ability to catch wild Pokémon. Touch the Berry button or Poké Ball button during the encounter to access these items. 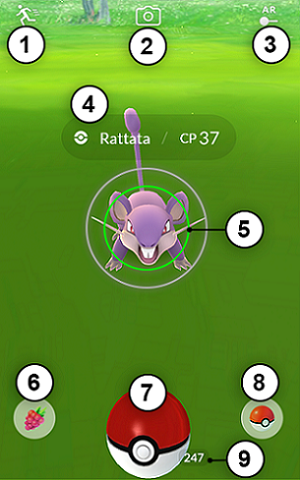 To catch a Pokémon

You can earn certain bonuses when catching Pokémon: